Over the weekend of 5 – 6 December 2015 Storm Desmond – the fourth UK named storm of the winter season – brought damaging winds and heavy rain across Scotland, which experienced its most severe flood event since the advent of the forecasting service nearly 5 years ago. Impacts were widespread, and particularly severe in the southern Borders area. We issued our first ever Flood Guidance Statement containing a red (high) risk area, and also issued the first severe flood warnings since the service began. This is the first of two articles looking at the Desmond flooding. This article looks at the forecasting for this event; the second one will look at how this compared with a similar event in 2005. 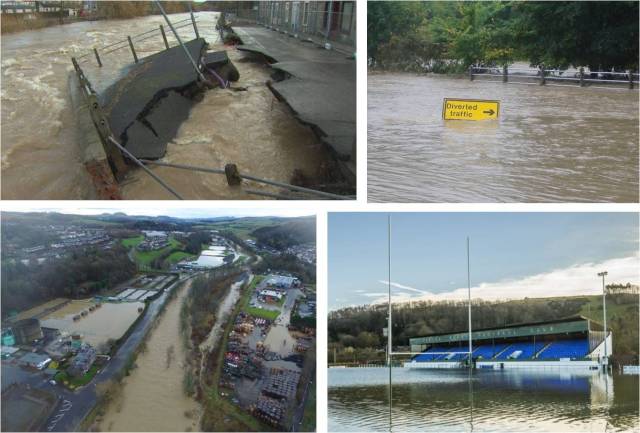 Exceptional rainfall totals were recorded in a 48hour period from the 4th to the 6th of December as its associated weather fronts wriggled southward across Scotland and northern England.

Forecasters at the Met Office Aberdeen watched the developments of Desmond closely. The ground was already saturated after a wet and gloomy November – so the challenge was to predict as accurately as possible the intensity and distribution of the rainfall. Forecast models tend to provide more reliable guidance for the distribution of rainfall that is dynamic (frontal) rather than locally generated (e.g. thundery showers).

It was recognised at an early stage that the system would have a moist ‘river’ or ‘conveyer’ of winds ahead of the cold front. It was also important to consider the orographic enhancement of rainfall totals over windward mountain ranges.

Whilst the frontal structure of Desmond was complex, the initial weather predictions supported the view that the cold weather front would clear southward into England; and that the primary rainfall totals would be associated with the leading weather fronts. As Desmond moved towards Iceland, subsequent weather calculations indicated a trend to a slower and more erratic clearance of the cold front southward over the weekend. 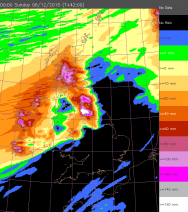 Then finally; the cold front almost became stationary across the Borders, as further weather disturbances ran along it bringing further pulses of heavy rain.

The greater persistence and intensity of the moist conveyor, as well as the slower clearance of the dynamic rain associated with the cold front – lead to the prediction of exceptional rainfall accumulations across NW England and the Scottish Borders.

High flows were forecast throughout Scotland, as can be seen on the Grid-to-Grid (G2G) river flow model spatial plot, below. The widespread and prolonged nature of the expected rainfall meant that almost unprecendented quantities of run off were expected. 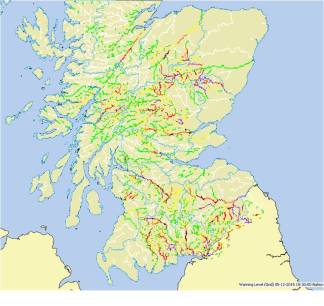 Of particular concern were the Scottish Borders and Tayside, the G2G forecasts for which can be seen below. The forecasts for Hawick in particular were very consistent from two days before the event and closely matched what did occur. The forecast flows were comparable with those experienced in the extreme event of 2005, when there was extensive property flooding. The river Tay forecasts, whilst showing quite a range, all consistently indicated an expected flow approaching at least as great as that seen during the flood event of 2005, and possibly even the event of 1993, which was the largest in recent history. In the event it is clear that the model overestimated the Tay flows somewhat, possibly due to the non-inclusion of hydro schemes upstream which may have attenuated the peak of the flow. 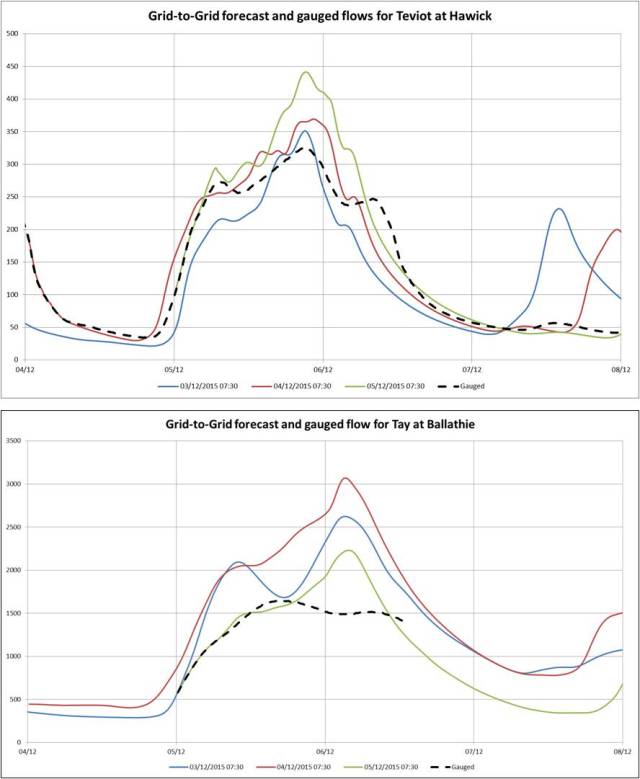 The heightened flood risk for the weekend was first signalled on the Flood Guidance Statement on Thursday, with a very low likelihood of significant impacts indicated. As confidence increased, on Friday the likelihood was increased to high, giving amber status to a large part of the country. Weather forecast models and G2G were giving consistent forecasts of very high rainfall totals and exceptional river flows. During Saturday it became clear that areas of the Scottish Borders, particularly Hawick and Newcastleton, were expected to experience severe impacts. These areas are not very far from the parts of northern England that were also going through extreme conditions.

A large amount of rainfall fell across Scotland from Friday through to Sunday. As can be seen below, the main areas affected in Scotland were the Borders and the centre of the country (Tayside area) plus the north west.

Rainfall intensity from RADAR for the event 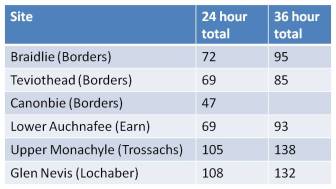 The impacts of this event were considerable. 15 flood alerts, 75 flood warnings and 2 severe flood warnings were issued across the country.  Over 150 properties were flooded in Hawick and other locations across the country. Significant travel disruption occurred. The Perth flood defence scheme was activated, entailing the closure of the main town bridge. Several railway lines were closed. Travel impacts were also exacerbated by the (unrelated) recent closure of the Forth Road Bridge for emergency maintenance.

This event proved a major challenge for the forecasting service. For the first time we had to decide on issuing a Flood Guidance Statement with an area on high (red) status. We also input to the decision to issue two severe flood warnings, also an unprecedented situation. Rainfall predictions, particularly the UKV 36 hour high resolution forecasts, proved to be very reliable for the most part. G2G forecasts were invaluable. They were particularly in demand for locations where no local model currently exists, and for lead times longer than that used for local models. Timely forecasts and warnings enabled mitigating actions to be taken. As will be shown in the next blog, improvements in forecasting and warning have led to a much improved outcome since the last time we saw this magnitude of flooding in Scotland.

By Richard Maxey and John Mitchell