Decision making in times of uncertainty: the crying wolf

Posted on November 12, 2015 by michaeldcranston

Nikéh Booister presents the second and final part of this series on decision making in times of uncertainty. 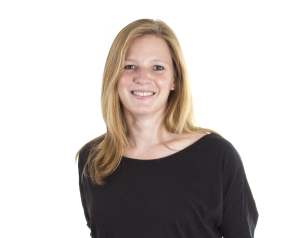 “The forecaster has to be the expert on knowing what uncertainties are and where they come from as we could have read in the previous post. The forecaster has to decide on what is relevant and not and to a certain extent already has to make a decision on the quantification of the uncertainty. Whether or not a forecaster understands and interprets correctly the uncertainty, the decision maker has a final call and responsibility to “pull a trigger” for action.

As mentioned in the blogpost of Paul Ryles; longer lead time makes the prediction of a future situation more challenging; the rate of uncertainty is higher. Probabilistic forecasts indicate possible future outcomes of a system and give the decision maker and responder more possibilities of responding (or at least the consideration of responding and with this more time to respond). This makes it possible to respond earlier in time and make decisions with a lower regret. Making a decision based on a deterministic forecast seems easier because it presents a binary solution (yes or no decisions). Nevertheless research has proven that decision making based on a probabilistic forecast gives better results (Ramos et al. 2013). 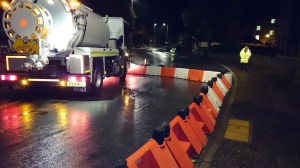 When decision makers are introduced to the problem of uncertainty in forecasting it can appear to be too much; too complicated; and out of the scope of the decision maker to respond properly to this. This interacts with the fact that the decision makers and responders are the ones that have to deal with for example the uncertainty of citizen response. Thus, the responsibility is bigger. When a wrong decision is made, there is a threat of a “crying wolf” principle. Despite the efforts, there will always be dissatisfaction with the decision taken or damage occurred. And so, someone to be blamed. When a decision is based on a deterministic one, it is the model or the forecast to be blamed and not the decision maker – which makes the situation more acceptable.

The ultimate question in forecasting and decision making is who is responsible in the end? And who is to blame in the case of a wrong decision being taken? Don’t we all try as hard as possible? 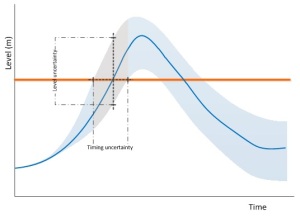 Timing and level uncertainty in flood prediction makes it hard to decide. The longer the lead-time the higher the uncertainty (Source: N.Booister M.Sc. thesis)

Models are improving, more lead-time is being provided, but uncertainty will always remain. Decision making stays a difficult and also a sensitive topic.”

This entry was posted in Forecasting, Probabilistic, Risk communication. Bookmark the permalink.