Radar coverage and suitability for flood forecasting in Scotland

Posted on November 3, 2014 by lindaspeight 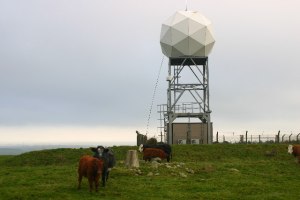 Radar is a powerful tool for observing rainfall over large areas in real time. It is also used to produce nowcasts (short range forecasts for the next 6 hours) which are used to provide flood warnings for rapidly responding catchments such as the Ruchill Water in Comrie.

Radar systems work by using an echo-sounding system. Electro-magnetic waves are transmitted and the time taken for the beam to travel back is used to identify the presence of rainfall (if you want to know more there is an excellent guide to the technicalities and history of weather radar available from the Met Office).

We use radar a lot in the forecasting service but there are some unique challenges with doing so in Scotland;

Good quality observations of rainfall are essential to support our flood forecasting and warning capabilities. We asked the Met Office to review the radar coverage in Scotland to help us better understand where we can be confident in our forecasts and where we should target improvement. Unsurprisingly the report found that when compared to rain gauge data the areas identified above have a lower detection efficiency than the rest of Scotland, largely due to distance from the radars. 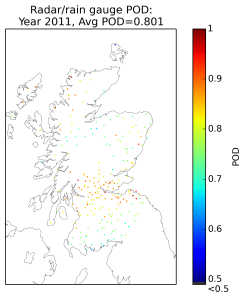 SEPA are now considering alternative methods of improving flood forecasting and warning capabilities in areas where radar quality is poor. This might involve making better use of the UKV forecasts directly in some of our catchment models rather than using nowcast or possibly to trial temporary radar in areas not sufficiently served by the UK-Composite.

In addition the Met Office are currently carrying out a radar renewal programme as well as developing techniques to correct for beam blockages and orographic uplift which will hopefully benefit Scotland in the future.

This entry was posted in Flood, Forecasting, Radar, Weather prediction. Bookmark the permalink.