Storm Frank – how was the medium range flood guidance?

The rainfall associated with Storm Frank on 30 December 2015 caused some of the most severe flooding seen in Scotland for many years, particularly along the river Dee in Aberdeenshire and the rivers Cree and Nith in Dumfries and Galloway, along with record river flows and  rainfall amounts in some areas. In the first of a series of articles John Mitchell and Richard Maxey discuss how well the event was predicted, and how the forecasting service reacted in the days leading up to the flooding.

How well did we forecast the severity of Storm Frank?

In addition to the weather forecast information there was a clear signal from the Grid-to-Grid hydrological model that extreme river flows would be reached in several locations. The guidance from the Met Office discussed below helped give the hydrologists confidence in the flow forecasts that were produced.

The first signs of a major storm were noted on Christmas Day. Met Office Guidance available to the flood forecasters noted developments in the USA, where warm air was moving north from the Gulf of Mexico and cold air moving south across Canada to combine and generate a strong jet, with the potential of generating very deep lows running towards the UK later on the 29th. These developments could produce prolonged heavy rain. In addition a note was made of strong orographic modulation likely over western hills and very significant rainfall totals. 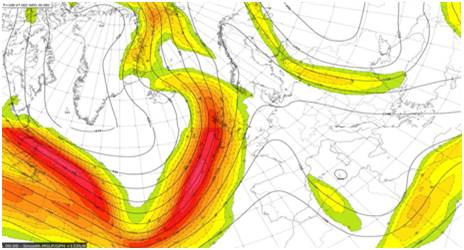 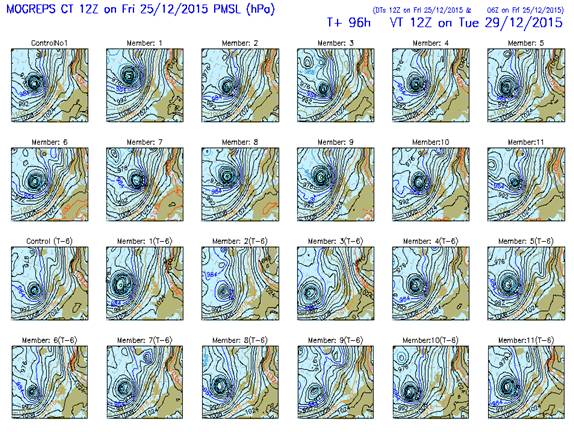 MOGREPS Forecast Charts for 1200Z Tuesday 29 Dec
Demonstrate a consistent signal for deep low pressure to be located just to the west of the British Isles. Note that whilst the signal is consistent there is greater uncertainty as to the low’s precise location.

On Boxing Day the risk of disruptive rainfall was noted and a National Severe Weather Alert for rainfall was issued. Concern that the synoptic setup was conducive to strong orographic enhancement in addition to dynamic forcing was noted. 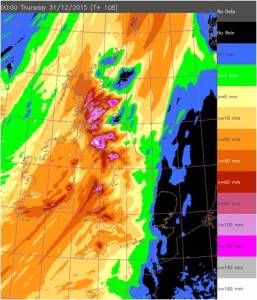 Using the Met Office MOGREPS system forecasts noted that the majority of output suggested that some very humid air may be entrained into the system with waves developing along the cold front, allowing a broad warm sector twinned with a very strong flow to cover to the UK on Wednesday. This would provide all the ingredients required to give a further bout of prolonged, heavy precipitation across some western areas. Specifically the strongest signal for heavy rain looked to be on the Wednesday (30th), again highlighting SW Scotland in particular as potentially seeing some very significant totals. This was the first signal of a backing of the wind-flow and hence distribution of orographic rain.

The Flood Guidance Statement (FGS) issued on 26 Dec indicated a low (yellow) flood risk for the south of Scotland for 30 Dec (day 5), indicating a very low likelihood of significant impacts. 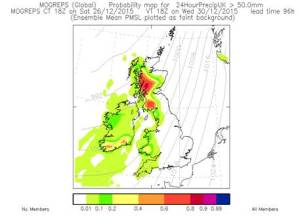 On 27th December there was reasonably high confidence in the broad development – but there was continued uncertainty as weather disturbances were expected to run along the front. Heavy and persistent rain on SSW facing up-slopes was indicated for the 29/30th December. A Weather Warning – a Yellow Alert for Rain for the 30th December was issued to the public on the 27th that indicated ‘ 60-80 mm over some higher ground within this area, and the potential for the most exposed locations to receive in excess of 120 mm.’

On 28th December guidance was still for heavy and persistent rain affecting many western areas. There was still high confidence in the spell of wet weather, though there was continuing uncertainty in detailed distribution and timing of the weather systems crossing the UK. Amber warnings of rain were issued – ‘Rainfall accumulations through this period expected to be widely 20-40mm, with 80mm over some higher ground within the area, and the potential for some exposed locations in southwest Scotland to receive 100-150 mm.’

Summary Flood Guidance Statement maps for the days leading up to the event on Dec 30.

The potential for heavy, orographic rain on Dec 30 associated with Storm Frank was identified on Christmas Day. Ensemble forecast models furnished the forecasters with invaluable information to determine and communicate the likelihood of the event.
The possibility of a significant event in the south of the country was seen four days in advance (day 5 yellow) with possible severe impacts identified 3 days in advance (day 4 amber). As will be seen, the long lead time forecasts for this area were very good.

The Aberdeenshire event was flagged three days in advance (as a day 4 yellow), but as discussed above the uncertainty in the precise distribution and detailed timing of the event meant that severe impacts for this area were not identified at this early stage. Subtle alteration of wind-direction (and speed) can have marked impact on the distribution of orographic rainfall. In this case, the backing of winds to the south brought greater exposure to the south Cairngorm Mountains and Upper Deeside catchments. At the broad-scale the weather models performed well. It will always be challenging to match capability for wider-scale guidance against the demand for detailed local information.

The next article in this series will look at the forecasts for rainfall and river flow in the immediate run up to the event, how they informed the flood guidance the day before and during the event, and how they performed compared to what happened on the ground.

2 Responses to Storm Frank – how was the medium range flood guidance?