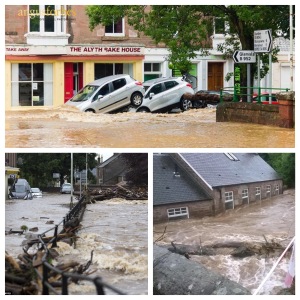 A major clean-up operation is underway following flooding that affected some Perthshire communities on the 17th July 2015. Villages such as Bankfoot were affected and surface water flooding was seen across much of the road network; however the flooding impacts were most critically witnessed in the town of Alyth. During the morning of the 17th July, serious flooding from the Alyth Burn resulted in the evacuation of 70 homes and businesses, significant impacts on bridges, with cars being swept along due to the force of the water, and over 750 properties being left without power. The spell of heavy rain originated from an occluding frontal system associated with a low centre near North West Ireland which tracked northwards across Perthshire on Friday morning. It was an active frontal system with the rainfall amplified by uplift over the hills with embedded heavy showers. Numerical weather prediction models were highlighting this area well; the UKV model was estimating a broad area of 30 to 40mm in 6 hours and MOGREPS-UK (ensemble forecasting system) producing a greater than 80% likelihood of more than 30 mm in 6 hours across central Perthshire. 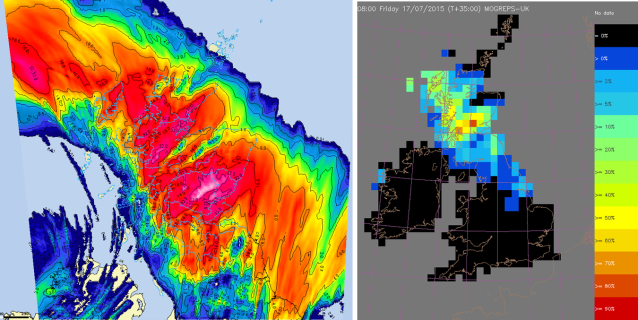 Although the investigation into the cause of the flooding continues, the relatively short duration of the intense rainfall has certainly been a contributing factor. Previous research into flooding impacts carried out by the flood forecasting service suggests that this depth of rainfall over this short duration has the potential to lead to significant flooding. Although there are no raingauges in the immediate vicinity of the Alyth Burn catchment, some raingauges in the area did record significant 6-hour accumulations including Kindrogan (40mm) and Perth (43mm). Radar estimates across the small catchment provide the opportunity to estimate the distributed rainfall depths for the Alyth Burn catchment with totals being estimated in the range of 30mm in Alyth to 42mm in the headwaters.

Figure 3: G2G (a 1km distributed hydrological model for Scotland) highlighting areas of greater than 60% of ensemble members above the 2-year warning level (left) and model predictions and observed flows for the Craighall gauging station.

Likewise the hydrological model Grid-to-grid (G2G) was also suggesting likely response in the river systems across Perthshire and Angus. The lack of gauged data for smaller catchments, such as the Alyth Burn, in the area makes it difficult to assess the accuracy of G2G estimated flows, however for some gauged records it appears that the severity of the flows may have been underestimated in places (River Ericht at Craighall observed peak flow estimate 335 and UKV deterministic G2G prediction 226 cubic metres per second).

These forecasting tools were able to allow for the prediction of potential flooding on the 17th. Whilst minor flooding impacts were expected, the Flood Guidance Statement published on the 16th July did indicate the potential for some significant impacts, although the likelihood was very low. Some immediate lessons could be taken away from the experiences of forecasting this event, specifically:

For information on the how flooding hazard impacts are forecast please read our guide to the Flood Guidance Statement.